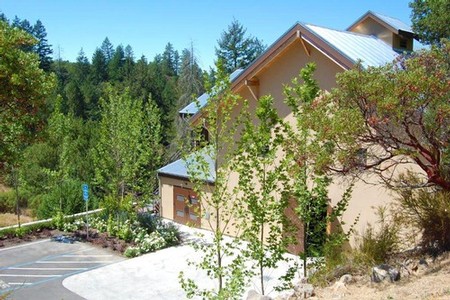 The seeds of Bravante Vineyards were planted in 1993 with the marriage of Nancy Nies and George Bravante at Meadowood Resort. Their shared interest in agriculture led them to purchase a plot of land on the esteemed Howell Mountain upon which they built a home that would overlook their first vineyard. As the vines grew, so did their family – William, Mario and Matthew, who were born in the years following.

Several years later, George and Nancy sold their original property and bought a 20-acre parcel close to their original Howell Mountain homestead with the goal of producing world-class wine. In 1997, Bravante Vineyards became an established vineyard. They partnered with some close friends and set out to create a state-of-the-art boutique winery with the highest quality of grapes in the valley. The first vintages were released in 2000 – a Cabernet Sauvignon and Merlot. Over the next decade, the land provided bountiful harvests and Bravante Vineyards still continues to grow.

Built on family and friends, Bravante Vineyards maintains a “quality over quantity” approach in order to preserve the integrity of the land. Bravante Vineyards is committed to bottling perfectly balanced wines that offer true expressions of all that Howell Mountain fruit has to offer.